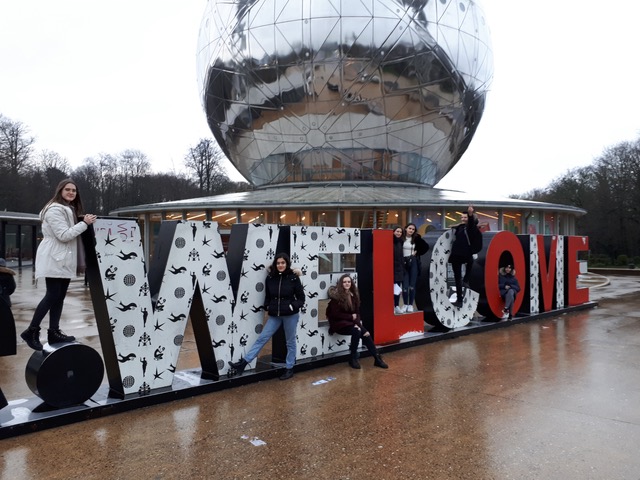 Our trip to Brussels began at the Vienna International Airport on Monday morning. It was a really exciting experience, because some of us flew for the first time. When we landed, we went to the city by bus, where a nice local man gave as a tour around the city. We learnt a lot about the history, architecture and culture of Brussels, but also of Belgium. Some of the sights that we saw are the Brussels Cathedral, Grand Place, Manneken-Pis and the Comic museum.  It was amazing to hear about the old and new part of the city. Although the weather wasn’t  in our favor, we still enjoyed it. (Tamara 6e)

On Tuesday we went to the European Parliament, where we met the Austrian MEP Dr. Othmar Karas. After looking through the building a bit, we met him in a conference room. First he introduced himself, explained current topics of the EU and talked about his work. Later on we had the opportunity to ask him some questions. Dr. Othmar Karas has already known that he wants to work in a political direction when he was in school. Nowadays, he is one of the six vice presidents of the EP.

In the afternoon we went to the Parlamentarium where we played a game. That game was about discovering how the Parliament works. We were split up in four fractions and discussed about microchips and a water pipe line through whole Europe. It was a nice experience and we understood the work of the EP much better. (Mariela 6e)

On the third day of the 6E’s trip to Brussels we drove to the European Commission. We went to the Visitors Centre and listened to a lecture given by an employee of the European Commission. We learned a lot about how the European Institutions work and how they cooperate together. But our trip was more exciting than that. We got the full EU experience when we went to the Council of the EU. We sat in one of the conference rooms used in some of the meetings. We also got to hear a little bit about the Council of the EU. We also had the chance to see the big meeting room in the Europa Building which was special because normally it only opens once a year during the Europe day on the 9th of May. (Zeena 6e)

On Thursday, the 6E travelled by train to Bruges, an old medieval town in the north west of Belgium. It’s known as the capital of West Flanders and the „Venice of the North“. The bad weather conditions sadly shortened the trip and the two-hour tour guide. The city center mostly consists of chocolate stores and waffles cafes. The historic city center of Bruges is also under UNESCO’s World Heritage List. After the trip back to Brussels, some of us decided to still go ahead and visit the Atomium, the most popular touristic attraction and the symbol of Europe´s capital, which was originally constructed for the 1958 Brussels World Expo. (Miruna 6E)

On our last day we visited The  Permanent Representation of Austria to the EU, where we met Mag.a Mirjam Dondi who welcomed our group and gave an overview of the role and interactions of the Austrian Permanent Representation with other EU institutions. The presentation was interactive and followed by an exchange of views with the participants. Furthermore, Mrs. Cosima Hufler, the Chair of the Bureau of the 4th session of the Governing Body of the International Treaty on Plant Genetic Resources for Food and Agriculture, talked about the economics and “The Green Deal”. After lunch break and five interesting days in Brussels we went back home to Vienna. (Ema 6E)